Bassoon Tonguing and Articulation: How to Make it Cleaner and Faster 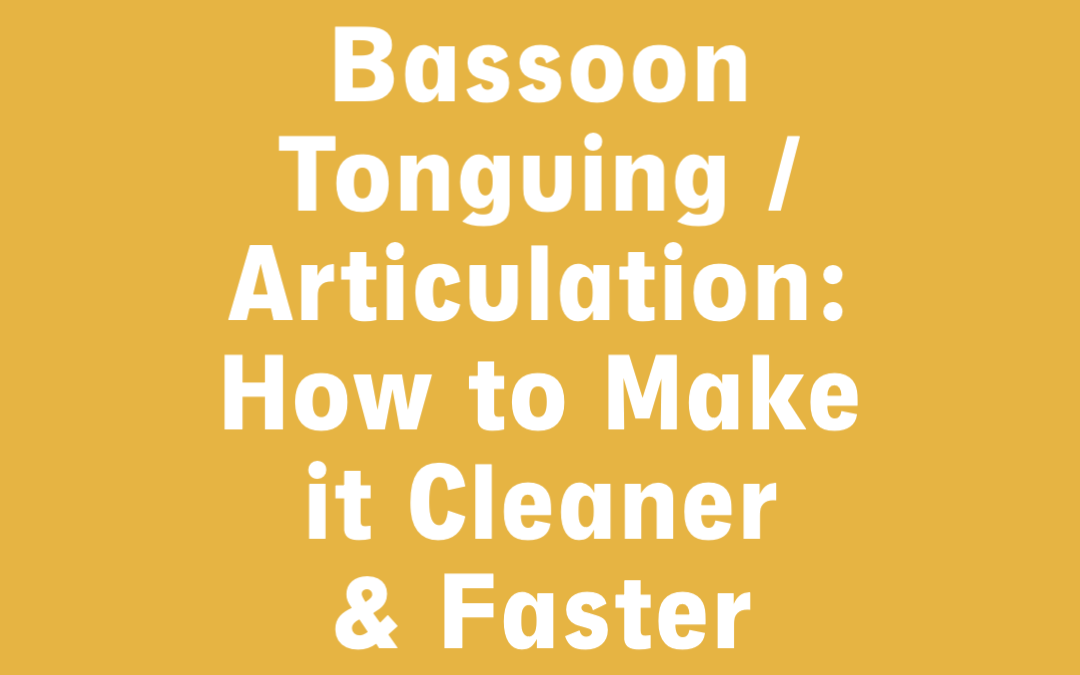 Do you feel like your tongue is slow or unfocused when you play bassoon?  Do you have issues with response on certain notes or problems with your tongue and fingers lining up when you play certain passages?  These issues can generally be fixed with better tonguing technique.  Watch the video below or keep reading to learn how you can improve your articulation!

Just so that we’re on the same page with how tonguing (or articulation) works on the bassoon, let’s talk about where exactly your tongue should be making contact with the reed. And yes, your tongue does in fact actually touch the reed to articulate, which can be a confusing concept if you’ve switched to bassoon from flute or a brass instrument.

A common mistake that beginners make is that they think that the tongue motion is about coming at or towards the reed each time they want to articulate a note. However, it’s really the opposite. You really should think about your tongue’s home base as being on the reed, and when you need to play a note, the tongue comes away in a downward motion and then returns to the reed at the end of the note.

Tonguing is not just about the initial attack of a note, it’s also about the release or the end of notes. When your tongue returns to the reed after you’re finished playing a particular note, it should be a lot gentler of a motion than when you started. If you were to slap the reed closed at the end of each note that you play, you would get a really abrasive, stopped sound.

Being able to control the release of each note is particularly helpful when you have to play in staccato passages like in the famous orchestral excerpt, Sorcerer’s Apprentice, and you want each of the notes to have a sort of buoyancy and crispness to them.

One of the biggest mistakes that students make when they are working on tonguing is that they prioritize what their tongue is doing, and not their air. How you control your air is key. You can have the best tonguing technique in the world, but if you aren’t putting enough air behind it, or if your air is inconsistent in some way, you’ll never sound good.

When I say air, I’m more specifically talking about air support. When you are using good air support, your abdominal muscles will be engaged to help maintain that support. You can’t just blow all of the air you have in your lungs at once into the bassoon, or else you would constantly be running out of air. You have to regulate it so that you always have a steady stream of air.

When it comes to articulation, your tongue should never be stopping your air stream, it should just be lightly interrupting it. Think about a garden hose. The water is pressurized, and so it is being forced through the hose before it comes out, and when you put your thumb over the end of the hose, the water gets interrupted, but that doesn’t stop the amount of pressure happening in the hose. Your air is the same way, it is always pressurized, energized, and ready to play. Your tongue simply interrupts it sometimes to separate the sounds.

One of the most helpful techniques that I try to incorporate throughout all of my playing is something called Breathe, Place, Play. I didn’t come up with this myself, it’s actually a fairly common idea that a lot of wind players use.

The basic idea here is that every time before you begin to play, you’ll Breathe in, you’ll place your embouchure and tongue in the “ready” position on the reed as if you’re just about to play with your air pressurized in your mouth (just like with our garden hose analogy), and then when you’re ready to make the sound, all you need to do is release your tongue from the reed to allow the air to pass through to create the sound. So in action, if you have to start on beat one, you can think “1, 2, Breathe, Place, Play.”

This technique really helps you set your embouchure and tongue in the right spot before you actually play, so you don’t have to worry about the note speaking right at the start. I find it to be particularly helpful if I have to start on a low note at a piano dynamic, which can be a little scary if you don’t feel prepared.

How to Tongue Faster

A question that I often get asked by students is how do I tongue faster? The short answer is: lots of practice. Assuming that your fundamental tonguing technique is in working order, you can practice specific exercises that isolate the speed of your tongue.

My favorite single tonguing exercise is by Frank Morelli, who is a fantastic bassoonist and teacher.  I have been incorporating this exercise into my personal practice for a long time, and my top speed went up by about 20 clicks just from using this exercise daily. When I first started this exercise, I was barely able to make it at quarter = 144 and after about a year or so, I was able to single tongue this around 168 or 170. What this exercise does is it isolates different parts of a sixteenth note passage so that your tongue becomes more even and efficient in a number of different scenarios.

My advice for you if you want to start incorporating this exercise is to start as slow as you need to go so that the whole thing is super clean and even.  You might have to start at quarter note = 80 which is completely fine! Then you’ll slowly build it up over time as you get better. Incorporate this exercise into your regular warmup routine, and you should start to notice faster tonguing in a matter of weeks.

Now the tips I just gave you are all about making your single tongue faster. There is a technique called double tonguing, and even triple tonguing, that allows you to go even faster, but I’m not going to get into those techniques in depth here because they deserve a separate video! If you might be interested in learning more about how to improve your tongue speed and how to get started with double tonguing, let me know down in the comments and I’ll be happy to put together a tutorial about it in the future!

Looking for more tips for improving your bassoon playing? Subscribe to my email list below and you’ll never miss an update!