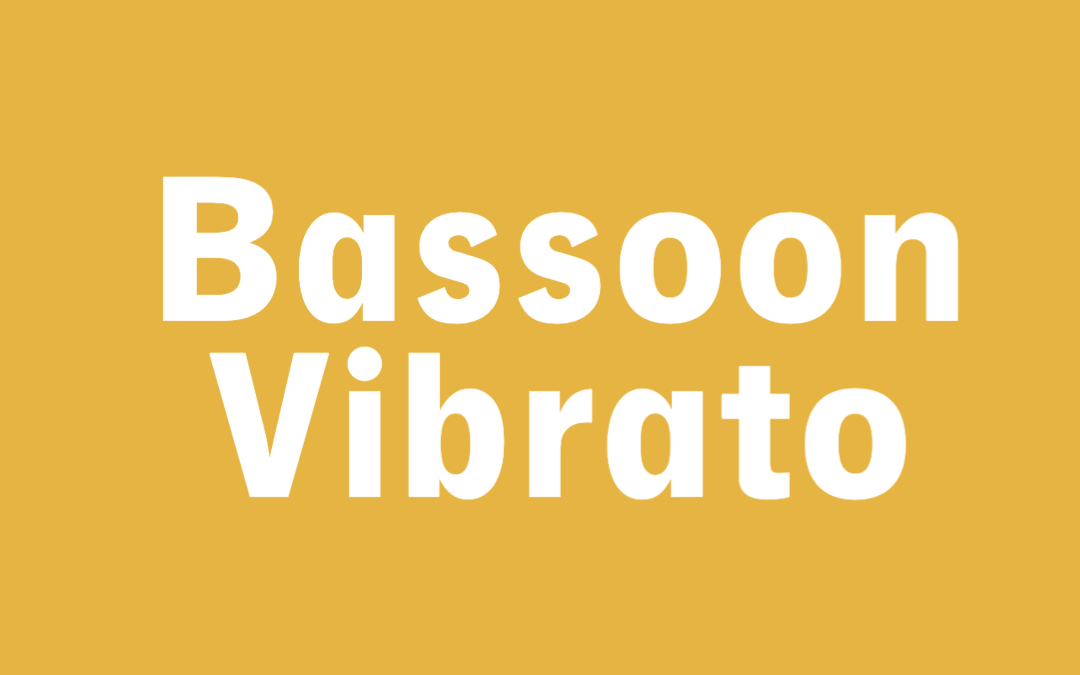 Have you ever heard a really great bassoonist or maybe another instrumentalist use vibrato before and wonder how they’re actually able to do that? Well today you’re going to learn exactly how to produce vibrato on the bassoon, how to get better at it, and how to start incorporating it into your own playing.

Before we dive into the exercises, I want to take a moment to briefly explain what exactly vibrato is and how it works on the bassoon.

In a nutshell, vibrato is a series of pulsations on a given note. Vibrato is an expressive tool that helps to create intensity or drama. You should not be using vibrato all the time, it is simply a tool that you can stick in your toolbox for varying expression. You also should not be attempting vibrato unless you are already using good air support. If you’re not able to play straight tones, or notes without vibrato, really well, then your vibrato is not going to sound good.

The way that vibrato is created on bassoon is with the use of the abdominal muscles. Your embouchure and jaw should not be moving in any way to create vibrato. Some instruments like saxophone and some brass instruments use jaw vibrato where they’re actually moving their mouth to create vibrato, but that won’t work on bassoon and we use our abdominal muscles to manipulate the airstream to create the pulsations.

Let’s dive into how to actually start producing vibrato on bassoon. As I said before, vibrato is created by moving your abdominal muscles quickly in order to manipulate the airstream so that you create the pulsations.

Before you begin, place your hand on your stomach and say the word, “Ha.” Now say it with a lot of force and put some air into it. You should feel quite a bit more motion in your stomach. That is similar to what it feels like to play vibrato, and that would be basically one pulsation of the vibrato. It feels very much like when you laugh really hard and then your abs hurt after awhile.

Now, using that same amount of force that you did for that second “Ha!,” say it 4 times in a row and sort of connect each one. Do the same thing, except now say “who”.

Let’s try that on the bassoon. Put a metronome on at 60, and pick a really comfortable note in the middle register of the bassoon and play 4 who’s in a row in time.

Now, let’s do eighth notes with the metronome.

And now, because vibrato should never sound super measured and robotic like sixteenth notes, we’re going to use quintuplets, which just means we’ll fit 5 notes into every beat.

So, it’s great that you know the exercise, now what? Well you’ll need to start practicing it daily. Spend 5-10 minutes every time you practice doing that same exercise until it starts to become like second nature to you.

In addition to daily practice, you should be trying to find ways to vary your vibrato and vary this exercise a little bit. Set the metronome to different tempos, practice the quintuplets at a really slow tempo, and then practice the triplets at a really fast tempo. There are many different types of vibrato and ways that you can use it. You can use really slow vibrato if you’re trying to be really dramatic. You can also use faster vibrato if you just want to add a little bit of shimmer to a note. Learn how to vary your vibrato in many different ways and you’ll have more tools in your toolkit to implement down the road.

I can’t stress enough how important it is to listen to really great musicians use vibrato, especially vocalists. Vibrato tends to come more naturally to vocalists than it does to instrumentalists, and so we should be trying to imitate really this sort of organic sounding vibrato. Try to identify all the little nuances in their singing to understand how they’re being expressive.

Just as we should listen to vocalists to imitate vibrato, we should also try singing ourselves. Now, I’m terrible at singing, and so if you feel uncomfortable with your singing voice, I completely get it. But, you and I should still strive to vocalize what we’re trying to do with our vibrato before we complicate things with the bassoon. If you can sing a passage, it means that you can hear it well, and that means that you’re going to be more likely to play it expressively on the bassoon.

So I’ve covered how to produce vibrato on the bassoon, how to practice it, and how to get better at it, but I haven’t talked too much about when you should actually use vibrato.

In my opinion, vibrato should be used pretty sparingly on the bassoon. I really only use vibrato when I’m playing a solo or if I’m in an ensemble and I have a part that is really exposed. In many types of ensembles, whether it’s band or orchestra or chamber ensembles, we are often playing a supportive or accompaniment role on the bassoon. We also are often playing the roots and fifths of chords when it comes to intonation, and if those sort of structural parts are constantly pulsating, it takes away from the sort of purity and integrity of those notes.

Now there are certainly exceptions to this, and you have to keep in mind that vibrato is an expressive tool, which means that it is highly personal and used in a variety of different ways. This is why it’s important to be listening to great examples of other musicians playing vibrato because it gives you ideas as to how you might want to use it.

If this video was helpful for you, please hit the like button and make sure you’re subscribed to the channel. It really helps me to know if this content was useful for you!

We could spend a lot more time talking about different types of vibrato and all the ways it is used. I’d like to know, do you have any favorite musicians who you think use vibrato really well? Let me know down in the comments and I’ll be sure to check them out!